“In the last 16 years of combat our competitive edge has been challenged on several fronts,” Taylor said. “However, armies don’t go to war, nations do and part of what makes us so powerful is our industry partners and robust manufacturing base.”

Taylor went on to say that APG has one of the highest concentrations of advanced degree holding personnel, such as PhDs and Masters, to the tune of 4,000, with only Redstone Army Arsenal in Alabama having a higher concentration. Further, Taylor said that we must prepare for more “immature” or “austere” combat zones.

“The Multi-Domain Battle: A Combined Arms Approach to Enabling Maneuver through CEMA Operations,” was the focus of more than 800 Soldiers, allied militaries, partnered militaries and industry members. The CEMA conference, which is co-sponsored by the Army and the Association of Old Crows (AOC), was held from Oct. 16-19 with a series of keynote speeches, technical sessions, networking opportunities, and capability displays. Speakers not only presented their successes, but more importantly, their challenges and their proposed solutions to those challenges.

“The development and proliferation of more advanced military technologies by other nation’s means that we are entering an era where American dominance of the seas, in the skies and in space can no longer be taken for granted,” said Watters.

Watters went on to say that electronic and multi-spectrum warfare has a seven year cycle: it becomes “in demand” in “mature” combat zones – those containing forward operating bases, base complexes, and so on, and then moved into a sustainability status. Echoing Taylor’s sentiment, Watters asked “When it comes to bringing these effects to the battlefield, how do we do that cross domain? How do we start to coordinate that?”

“Training like we fight in the non-kinetic world is a challenge,” Watters said, citing notional targets and symbolic achievements rather than actual electronic war fighting practices in training. 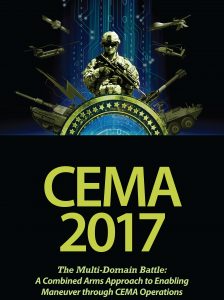 In just its third iteration, the CEMA conference has continued its steady rise in popularity with an approximate boost of 40 percent in attendance – lower than last year’s 60 percent, but still a steady rate – to now include participation from all major Army Commands and civilian institutions. The evolving threats that the CEMA community has seen recently has put them front and center of DOD multi-domain battle planning.

The Honorable Michael W. Wynne, the 21st Secretary of the Air Force, citing both William Gibson and Steven Bochco in his presentation, suggested that in “cyber space” from Gibson, the doctrine may have to be “let’s do it to them before they do it to us,” a quote from Shift Sgt. Stan Jablonski from Bochco’s “Hillstreet Blues,” be “good cops” before the bad actors attempt to achieve their goals.

Wynne’s presentation and speech also suggested that our comfort with overall design of software can be exploited; if a design or style appears similar to something we are comfortable with, it can breed complacency that can be exploited by bad actors.

Gary Wang, Army Deputy Chief Informational Officer, focused on “adapting the network” to ensure it was “standards based, survivable & protected, intuitive & interoperable,” again addressing an austere battle space that the military must prepare for.

Wang also said that intelligence, signal and cyber need to be considered more closely and asked the question “How do have uniforms [active and reserve military members] move within these communities without being detrimental to their career?” Wang further said that we to stop playing “American football” by having “an offensive team and defensive team” but rather “international football” where the team is prepared to change strategy mid-step, depending on who “has the ball” at any given moment.

Developing an understanding of the cyber war fighting picture and its place in strategy and tactics is key.

“The Army has tasked the CEMA section in Corps, Division and Brigade staffs to plan, integrate and synchronize cyberspace and EW effects to support the commander’s scheme of maneuver,” said Gary Blohm, acting director for CERDEC. “TRADOC’s [Army Training and Doctrine Command] Cyber and Intelligence Centers of Excellence are defining the doctrine, organizational, training, materiel and policy requirements to effectively fight in cyberspace and the electromagnetic spectrum.

“CERDEC is partnering with TRADOC and the cyberspace/EW warfighters to develop advanced S&T technologies that will provide the CEMA Section with the requisite suite of tools to support these emerging requirements,” said Blohm. “An example of this is our Cyber Blitz campaign that CERDEC co-led with the Cyber Center of Excellence. Cyber Blitz is a learning event that is helping define how the Army operationally adapts to cyber and electromagnetic threats. Cyber Blitz is also progressing the Army’s ability to understand the integration of CEMA, intelligence and information operations at echelons corps and below; it’s allowing us to see the effects of converging CEMA within the command post. These synchronized efforts are ensuring an economy of force for Army CEMA in a time of limited resources.”

“The CEMA conference serves as a critical synchronizing event as we gather industry partners, users, R&D centers, acquisition professionals, sister Services, and allied military to address our challenges and gaps in a holistic manner,” said Maj. Gen. Kirk Vollmecke, the Program Executive Officer for IEWS (PEO IEW&S). “Rapid prototyping, adaptable program model, and a development operations mind set are paramount to deliver now. We need to aggressively tackle EW with more commonly shared designs and optimized solutions to pace the threat. Finally, we cannot discount the limitations of the human mind or overly burden our Soldiers with equipment too hard to train or fight with.”